Way back in November of 2010, I put together a native app for the folks over at Naiku for the TIES 2010 Conference. At the time, the three major e-reader devices were the iPad (1st generation), Android tablets (v2.2/Froyo - if you were lucky), or the 3rd generation E-Ink Amazon Kindle.

Since Android and Kindle both use Java, I was eager to see what kind of native app I could put together in an "extremely short" amount of time. I wrote up the Android version first, and then turned my effort towards the Kindle.

The limitations
Developing a native app for the Kindle (E-Ink) is a very different experience than Android (obviously).


In the end, I managed to get something "highly usable" in time for the conference.
Here's the login screen: 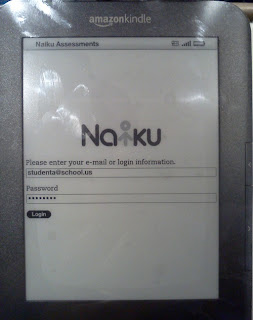 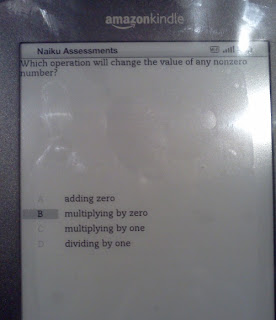 Not surprisingly, the "finished app" was ridiculously small and took no time to transfer over the wireless connection.

In the end, it was yet another great geeky experience!
Posted by Ben! at 7:53 PM No comments:

How old are these songs?

I'm constantly looking for new music - the upbeat kind that gets the energy flowing for coding. I used to listen to the station "93X", but I've noticed that their song catalog is becoming increasingly antiquated.  Since that's just a guess, it seemed prudent to verify the hypothesis using a little "cloud magic".

On the station's website, they have a "ticker" that lists the currently playing song. Using Firebug "Net" panel, it looks like the Javascript code has a timer that polls the site every 15 seconds for the current song's artist and title.  The URL request looks like this:

Now that we have a "easy" way of obtaining the current artist/song information, the next step is to find out the release date. Fortunately, Apple's dominance of the recorded music business comes in handy here. iTunes makes it easy to search for something - they even have a convenient API guide: http://www.apple.com/itunes/affiliates/resources/documentation/itunes-store-web-service-search-api.html

Thus, the search URI looks something like this:  https://itunes.apple.com/search?media=music&term=SOUNDGARDEN+BLACK+HOLE+SUN

The result is a JSON array (very nice!) containing 43 matches. The hard part here is going to be finding the "correct" entry among all of the values. It seems that the "ideal" way to accomplish this is to find the object(s) which match (case insensitive!) these property values:
"trackName":"Black Hole Sun",
"artistName":"Soundgarden",

In this case, the "solution" is to simply pick the oldest release date.

Saving it for later

The next part is accumulating that information and storing (persisting) it so that an continual analysis can be performed. Otherwise, it's possible that a particular DJ may prefer the "classic" songs over the newer ones, and thus would skew the overall results.  The big question here is "what's the average age of the songs played on this station?"

Since this is being stored "in the cloud", a few options are available.

For this trivial app (small amount of persistence), any of them will suffice. More on that, and the eventual code/implementation coming later.
Posted by Ben! at 10:01 PM No comments: