A month ago, there was a huge amount of discussion over a clock that a kid brought to school, which had him arrested and suspended. I have a clock obsession, but only for really weird/geeky clocks. My current favorite is the Tix Clock available at ThinkGeek.

Since I'm usually a month (or more) behind on my blogging, here's my story.

Back in 1998, my dad happened to have a bunch of dual-color LEDs, consisting of Green and Red (and thus, Yellow when both colors were illuminated) that he no longer needed. When I counted them out, there were just over 60 LEDs present - which made me wonder if I could build a clock?

I had spent too much time building all kinds of fun things using various forms of the 8051 microcontroller, and since I had the EEPROM burner and UV eraser in my home lab, it was the best fit for the project.  (These days, I'd much rather use an Arduino or something).

Multiplexing to the rescue!

I'm a huge fan of multiplexers (and serial shift registers). In this case, I took the 60 LEDs and divided them into four quadrants. I could use two pins to select a quadrant, and then use four pins to select 16 different possible LEDs within that quadrant, using the 74154 4x16 demultiplexor. Throw in the two pins needed for the color selection, and I could drive all of the necessary data signals with eight little bits!

Since I had a few extra data pins available, I hooked up a few push buttons. Two are to set the minutes forward/backward, and two are to set the hours forward/backward. There's a fifth button, but I don't remember what it does.  Maybe some day I'll find the old assembler code I wrote for this project, and see if there's any mention of its purpose.

Any true hacker's project rarely comes in a "polished/presentable" case. So the next question was what kind of packaging to use for housing this project? I needed something round, and a large enough size to house a custom circuit board that I made. I thought of a frisbee, but they weren't deep enough for all of the wiring (done by hand - ugh!).  The next best candidate was an ol' fashioned pie tin!  After stuffing everything inside it, I used a piece of wire mesh to hold everything inside it.

Here's the "internal view".  The 8051 is the big 40-pin beast in the middle (with electrical tape covering the UV-EEPROM window). The push-buttons are just above the CPU. The 74154 is in the top-right corner. There's a bunch of 7407 inverters spread around the perimeter, which are used to drive the LEDs (common cathode/ground), along with a pair of transistors that supply the red/green anodes on the LEDs. Yes, I used to have a lot of spare time back then. 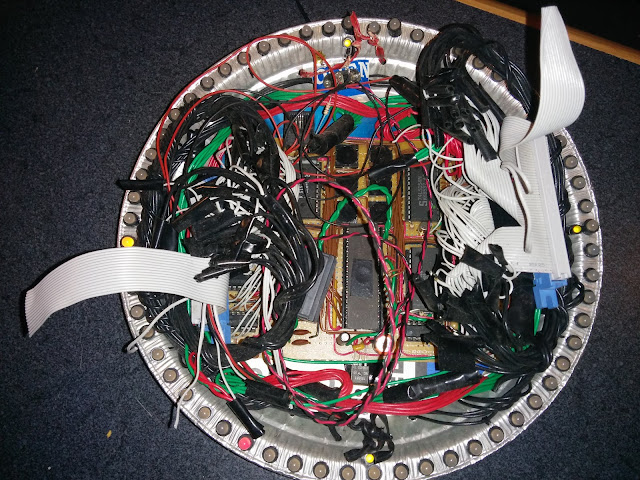 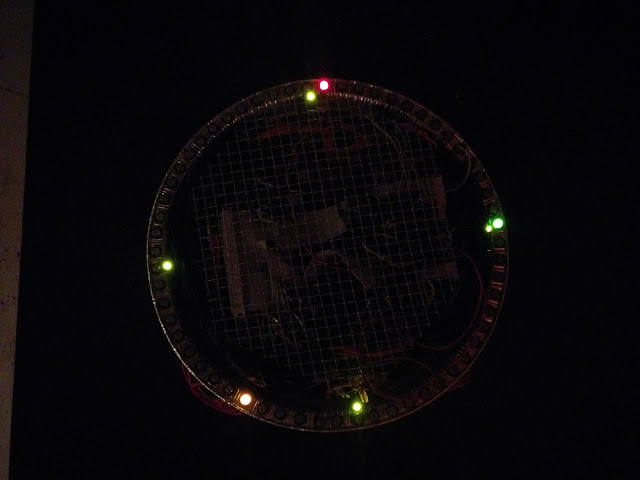 I'm really thankful I never brought it into school for "show and tell". What's your favorite geeky clock? Leave a comment below!